I meant to write this blog a couple of days ago...and today at last I'm updating.

When I heard the news saying Whitney'd passed away, I was shocked.
I haven't listen her songs these years, but when I was a high school student I used to listen to her songs and sang along. The first time I saw Whitney and heard her singing was PV of a song called "I Wanna Dance With Somebody." This song won the Grammy Award in 1988. I was really amazed with this song, I sang and sang everyday until I was able to sing by heart.

This is the song, I Wanna Dance With Somedoby, at the show of Grammy Awords 1988:


The day after Whitney's death when I and my husband were watching her video on youtube, we learned that Michael Jacson was also on the Grammy Awords show. My husband is kind of big fan of Michael Jacson, and I like him and his performans, so does my son!

I happened to find this website talking about Whitney's hit songs, its written in Japanese, though:
>> Whitney's Hit Songs


I love Whitney's "Didn't We Almost Have It All" and when I was high school student I practiced this song because singing in English at that time was really hard and difficult for me. Singing Whitney's songs
is almost the foundation of my English pronunciation. 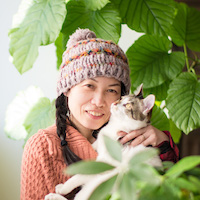 Author:chie
ちえです。唄うこと＆お菓子を作ることが大好きです。夫と2人で光永典人写真スタジオを経営してます。2019年12月にはこころ笑うサロンNICOLAをOPEN。私の詳しいプロフィールはコチラをご覧ください。
Hi, I'm chie. You can see my profile HERE. Thank you!